One of my favorite parts of traveling is seeing ancient ruins.  I let my imagination run wild as I try to envision what life was like in that particular time period, probably never coming close to reality.  However, this was exactly one of the reasons why the temples and ruins around Angkor is so fascinating!

We are not the “Hire a Guide” kind of travelors.  However, when it comes to a land steeped in so much history, we wondered if having a local give us background and historical information would make for a much clearer and memorable picture of the sights we would be seeing.  In hind-sight, we could have done most of it on our own, but at the end of the day, I am glad that we had someone who knew exactly where to go, we didn’t have to worry about driving and, while the history background wasn’t as rich as we had hoped, we still came out knowing more than going in!

After an all night flight, our first day was spent simply relaxing by the pool, taking a nap, getting a great lunch and wandering the Pub Streets.  Knowing that the next few days were going to be go-go-go, we opted for a day of leisure and relaxation before jumping into the fun. 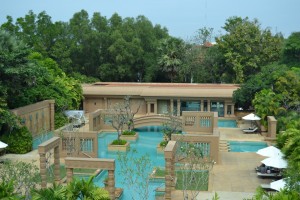 Beng Mealea, a beautifully ruined old temple.  This was a temple we had both wanted to see and where quite happy to have a driver (as it was far from Siem Reap; 70 KM) but was a great way to see more than just the city of Angkor Wat, which is where most tourists flock to.  Like many temples in the area, it has a mix of Hindu and Buddhist elements and combined with the overtaking trees, has a magical feel to it. 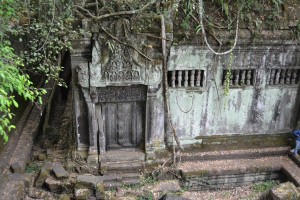 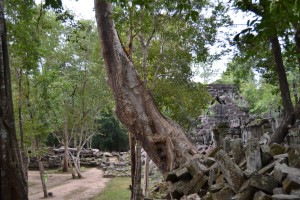 On our way back to Siem Reap, we stopped at one of the many floating villages on the Tonle Sap, the largest fresh water lake in Southeast Asia.  The lake in high season can stretch all the way from the outskirts of Siem Reap to Phnom Penh!  We were taken to one of the less touristy areas of the lake, where we were really able to see the locals living life literally on the “sea” and back channels. 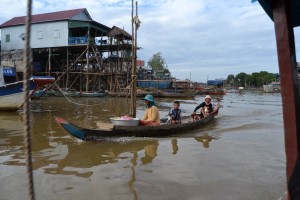 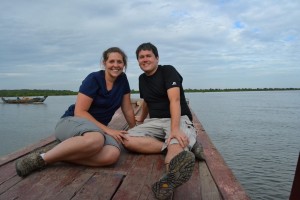 Our first stop was the Preah Ko Temple, a beautiful sandstone temple with very few other tourists, which allowed us plenty of time and space to take in the magnificent carvings on the walls. 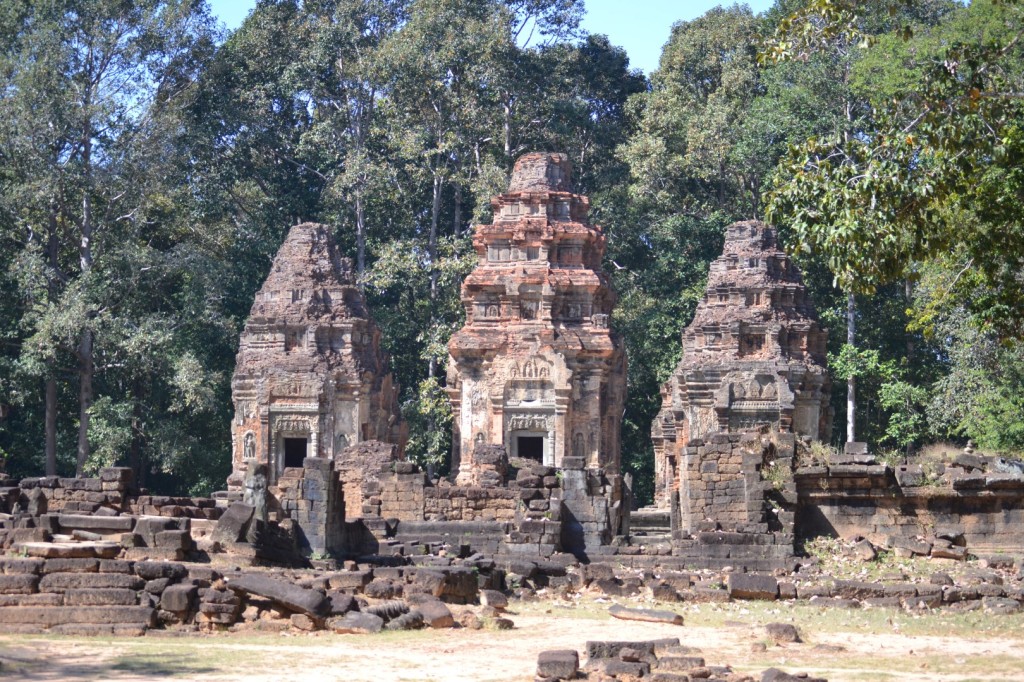 The next temple of the day was the ancient temple, Bakong Temple, built in the 800s!  The towering steps gave way to beautiful views over the jungle. 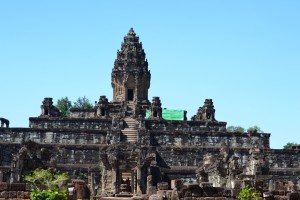 Heading back, we stopped at one of the may crocodile farms.  While we could have paid a few dollars for the spectacle of feeding a chicken to the crocs, we quickly made our way through the complex and prayed we didn’t slip into the pits! The rest of the afternoon and into late evening was spent at the “Cultural Village” in Siem Reap.  This complex held several shows throughout the night that brought folktales to life.  There were mini circus shows, a “traditional wedding” show, a myth about peacocks and the finale being the tale of the famous ancient king, King Jayavarman VII, who was also responsible for building many of the temples in the area.  This cultural village may be a great place if one has kids and would like a few shows, but I would have rather spent my time exploring the “real” culture of Siem Reap and Cambodia; one of the downfalls of having a guide, I suppose. Mini Circus at the “Cultural Village”

Our next morning was spent exploring the beautiful jungle and “mountain,” Kbal Spean, home of the thousand lingas.  A short hour long hike through the tangled jungle brought us to beautifully ancient stone carvings in the stone riverbed.  These lingas were a symbol of fertility to the land and all water that rushed over them considered holy.  Even after hundreds of years of water erosion, beautiful images of Buddha lying in the river and other motifs could be found all over the riverbed. 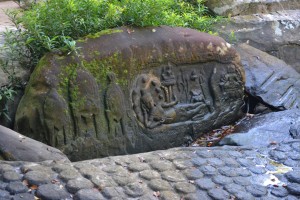 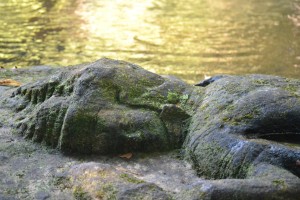 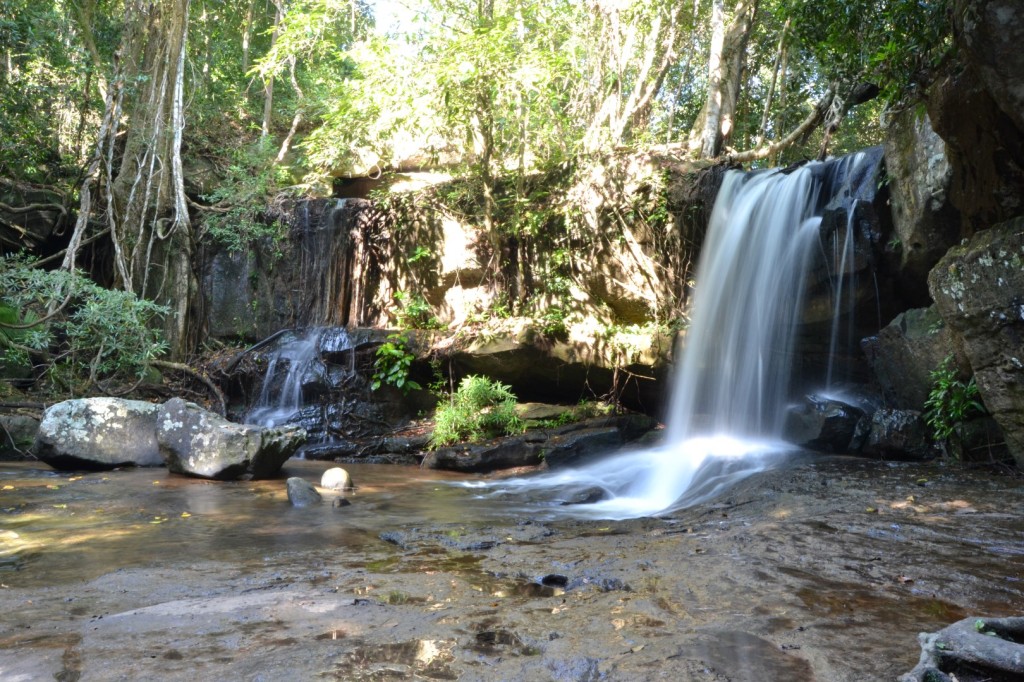 The next stop of the day was the beautiful pink “Lady Temple,” Banteay Srey and then to the “farmer’s temple,” Banteay Samré.  With very few other tourists here, this was one of my favorite of all the temples we saw.  We also stopped at the great Pre Rup complex, with plenty of ruined statues and staircases. 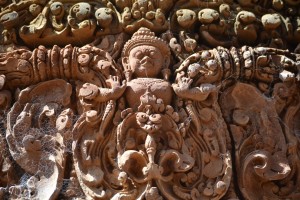 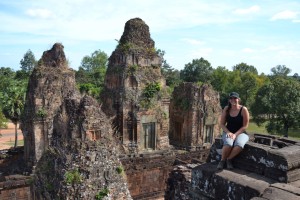 We finished our day going to yet another temple in actual Angkor town (unfortunately, I do not know the name, as our guide rushed to get us there in time).  As the sun set over the jungle, it cast beautiful shows over Angkor Wat off in the distance.  Even though we shared the experience with a mass of other tourists, it was still a stunning spectacle. Our final day was the big finale.  After days of seeing temples in the Angkor kingdom, today was the day we actually saw THE Angkor Wat and the Angkor City.  We started with sunrise (which depending on the time of year can be absolutely breathtaking, or in our case, somewhat lack-luster).  Regardless, you will be sharing the morning with hundreds of other tourists jammed near the pond waiting for their photo-op. 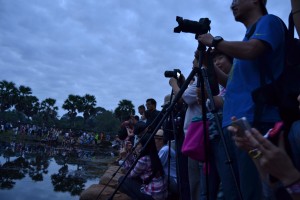 Everyone else wanting their perfect sunrise

Instead of going straight to the Angkor Wat (which is what all those tourists taking pictures are going to do), we left to go yet another favorite temple, Bayon.  This amazing temple had Buddha heads everywhere you looked, giving the feeling that Buddha himself was watching over you. Next, we headed to the very touristy location of Ta Prohm, yes, the Tomb Raider temple.  There is a reason why this was the set of the film and why so many people want to see it.  The jungle has truly taken over the temple, but in such a magical way that religion and nature are bound as one. Finally, the grand finale: Angkor Wat.  We spent the afternoon wandering around the giant ancient complex, taking in the carvings, staring up at the massive towers or just watching the young Buddhist monks.