For many people, visiting somewhere in Europe is on the top of bucket list.  Rightfully so, considering there is so much culture, heritage and history all packed into about half the size of the US.  You can go only a matter of hours and be in a completely different land with different food, scenery, language and more!

As someone who has lived in Germany for the past four years, it is always fun to see friends and family who visit try to navigate their way around the small things in life that are just plain different than what we are used to in good ‘ol Murica!  These insider tips on European travel will have you living and understanding life like a local, meaning you’ll get the most out of your time there. 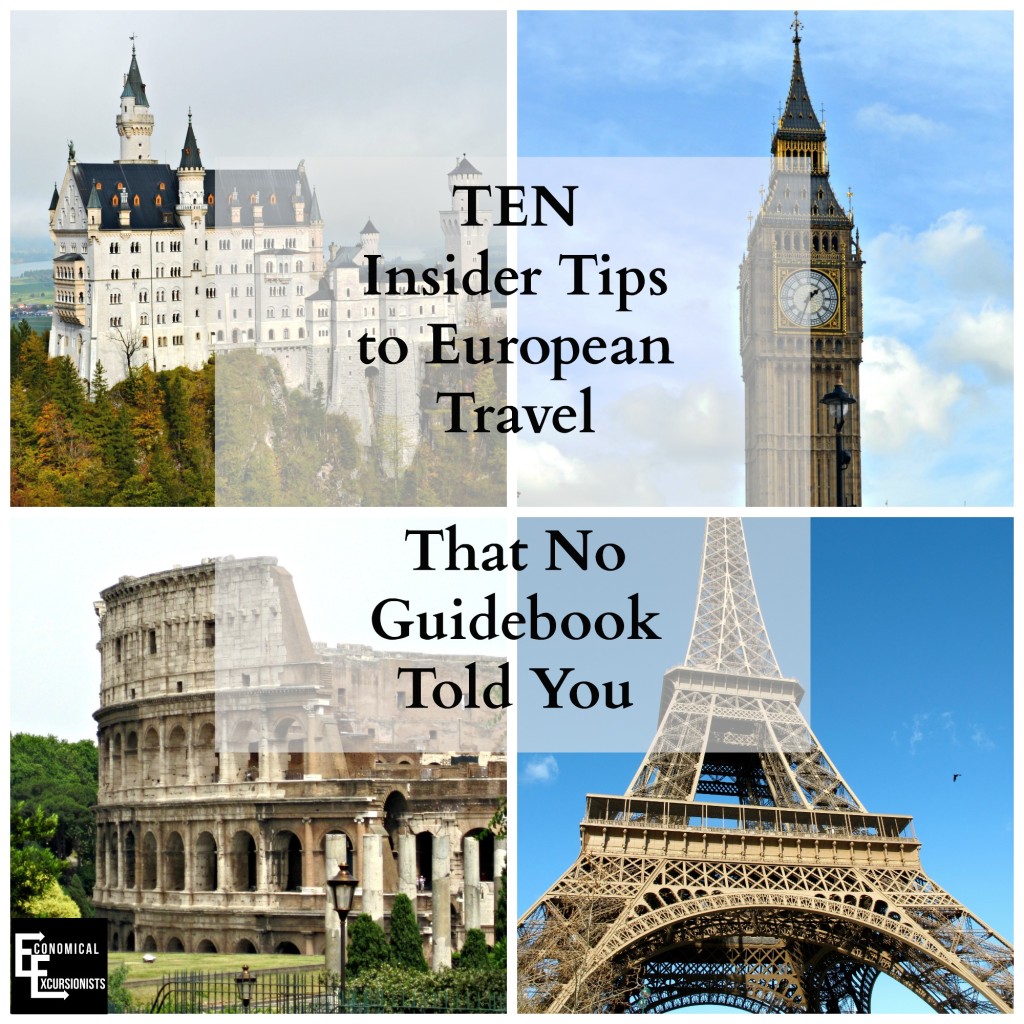 Get your change purse out if you are wanting to use a public toilet in most of Europe.  Chances are you are going to have to pay an attendant or there may even be a turn style to deposit anywhere from  20 Euro Cent to €1.  The good news is that many of these facilities are way nicer and must more clean than any public restroom you’ve used in the States because the attendant is cleaning it constantly.  The bad news is there are some with no attendant and you STILL have to pay! This means paying for a dirty bathroom, which just seems a little ridiculous!

Bonus Tip: Take toilet paper with you.  While this has gotten a lot better in recent times, it’s not uncommon to go into a public restroom only to find out there is no paper.

While we are on the topic of toilets, learn to get creative in your flushing technique.

This sounds silly but I don’t know how many visitors spend a good extra minute or so in the bathroom just trying to figure out how to flush the thing! Here’s a quick re-cap of just of a few that you might encounter on your European adventure

Two buttons:  The large one gives you a large and forceful amount of water.  The smaller gives you less.  You can figure out the need for two buttons.

When in doubt, just press both!

One Button: Push on the bottom half to flush.  No need for deep, pondering questions about big or small buttons.

Pull Knobs: Not as popular as it’s button cousin, but occasionally you will see a small “knob” on the top of the toilet.  Simply pull up.

Squatters: While not as frequent as in Asia, an occasional squatter will be found amidst the interstate rest stops.  If you don’t work out, go ahead and start practicing your squats before taking your trip, they will come in handy in these types of bathrooms.

As if paying for your toilet wasn’t enough, don’t expect to get free water either.

Paying: Water in many European countries is not free at restaurants.  In some places such as Italy, France and others, they get the importance of hydration and will just give you a caraffe of  complimentary water.  However, in many other countries such as Germany and the Czech Republic, even if you ask for “Table Water,”  you will not only get a disgusted look, but you will still probably be charged for the tap water!  But hey, you are in Europe! Get the wine or beer (which will probably actually be cheaper anyway!).  Who needs water!?

Mineral Water: Ok.  You are parched and determined to order a water- price be damned!  You take a large swig and suddenly your taste buds are assaulted with bubbles and a gross minerally taste.  Well, my friend, that’s because you just got a mineral water.  This carbonated drink takes time to get used to from many North Americans, but once you do, it is a crisp change from regular water and often what you’ll get if you don’t specify what kind of water you wanted.  However, to it’s unsuspecting victims, it can leave one even more thirsty and quite possibly angry!

To avoid a mineral water mishap, order your waters “Natural” “Still” or “Without Gas.”

Now that you have a full bottle of mineral water that you don’t want, you are probably ready to throw it into the trash.  DON’T!!!! 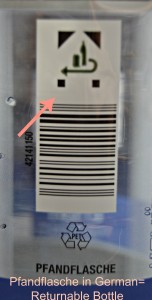 Return bottles with this sign to receive money back

Were you appalled that your small can of pop (yes, I said POP…I’m from the Midwest!) cost almost €2?  One of the ways that they incentivise people to recycle is by putting a high deposit on their cans and bottles.  Take it to any grocery store and you’ll see a machine that will give you a healthy portion of that money back.

While some countries (Germany, Austria and more) have banned smoking inside public facilities, not all have.   Even in the banned countries, that does not stop the large amount of smoke absolutely everywhere else.  There is a huge cafe culture in Europe, so sitting outside at any restaurant, beer garden or cafe is going to envelop you in a smoke cloud.  Even just walking anywhere in a city, people all around you will be puffing away and probably have no regard for if their smoke goes directly in your face.  If you are a non-smoker, this is just something you are going to have to get used to.

Sundays/ Evenings:Even in the big cities, Europe is often on a much slower pace than the States.  Don’t be surprised if everything is closed on Sundays or by 8pm even on a weeknight.  Some restaurants will have a closing day outside of Sunday as well to spend time with their own families, so check ahead if you can.

Siestas: Go to almost any Mediterranean country and you will be hard pressed to find a lunch spot anytime between 1ish and 5pm for their siestas, or mid-day breaks.  The good news is that these places also stay open late and often have a great night life, but for those late lunchers, it is difficult to find places open.  All that being said, whoever said, “Let’s take a nap every.single.day” should be my friend.

When an Ex-Pat moves to Europe, there are many countries that they think the locals are down right rude.  We all know the French, snooty stereotype or the German stoic looks.  Nobody smiles and don’t even think about asking the cashier how her day was.  However, this is just the culture.  Almost all Europeans are just as friendly as me and you….when you get to know them.  There is no robotic  “How are you today?” with an automated, knee-jerk response, “Good, and you?” exchanges because if you ask someone this, expect to get a REAL and genuine answer.  If their day was bad, they won’t hold back!  Many Europeans have no problem keeping their circles of friends close and random strangers on the street just that; strangers.

Just because you are complete strangers, do not be shocked to see someone’s privates while gallivanting around Europe.  Nudity can happen in any shape or form from a mother whipping out a boob to breastfeed while riding the metro to a group of woman tanning topless in a park all the way to men letting it all hang out at the beach with no reservations (honestly, which is worse: Speedos or just going for it?).  In almost any gas station, right next to the Bridal Magazines, you’ll find Playboys and other pornographic content for all to see. However, nudity in Europe is not the hyper-sexualized taboo that it sadly is in the States.  Body image issues are not as much of a thing, because Europeans often see everything from small to big and anything in between without spanks, push-up bras or other body enhancing clothing.  It is just a body.  We all have one.  If nudity makes you uncomfortable, there is a really simple way not be bothered by this: if you don’t like seeing it, then just don’t look.

You’ve probably read already that public transportation, biking and especially walking everywhere is often more common than driving.  But you’ll probably be surprised (and likely sore) by just HOW much walking you’ll be doing.  This can often come as a shock to the often overweight, drive-everywhere Americans.  I know several people who will actually start a walking program before traveling to Europe to get used to the amount they will probably be doing.  If visiting a bigger metropolitan city, bring your walking shoes and expect to be walking a few miles a day.  Even if in a smaller town, you’ll be walking to the grocery stores instead of driving.  My mom (Hi, MA!) actually “trains” to come to Europe by walking stairs before heading over the pond.  You’ll be amazed at the amount of steps at castles, in apartments and everywhere else that you’ll have to climb.  Go ahead and add stair climbs to your squatting training. 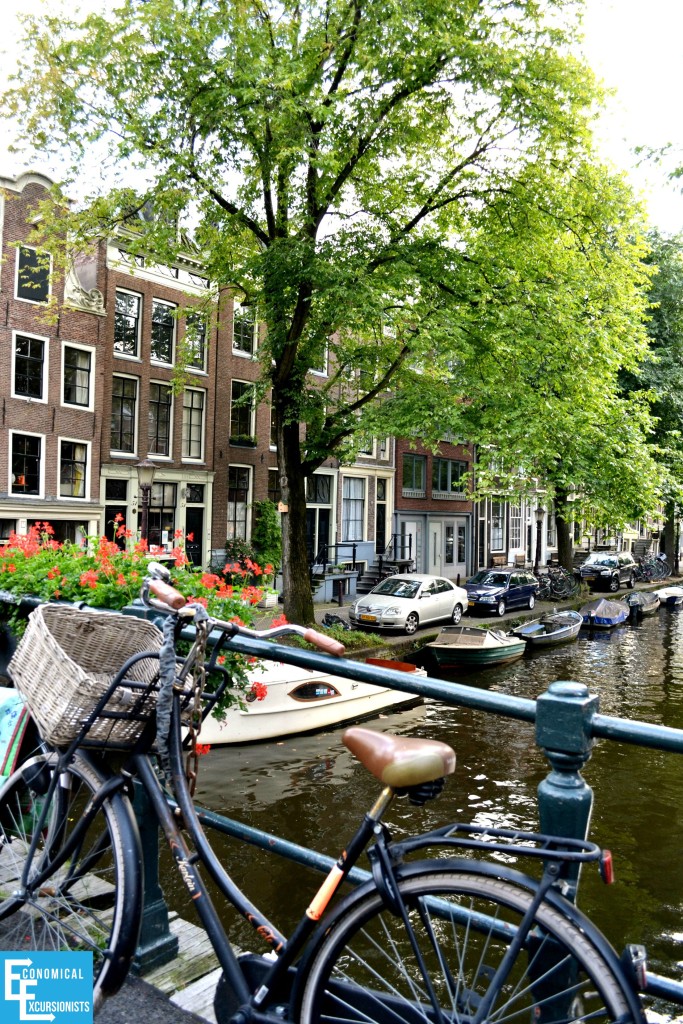 Did you know that there are more bikes than people in Amsterdam!?

You’ll also probably be encountering bicyclists.  Know that if you have rented a car, they have just as much right of way as you do.  In many cities, the bike paths are right on the sidewalk.  Some are easy to spot because of the bike sign on the ground, others may have a small white brick line denoting there are two paths.  You do NOT want to walk on the biking path!  By the time you’ve heard the ding of their cute little bell…it’s too late.

Planning a trip to Europe?  Here are 100 tips from fellow blogger EveryDayWanderer

Yes, Europe is different from the States.  Some people consider the differences a nuisance, but it’s the small things that make Europe unique and special.  Just because it is “different” doesn’t mean it’s wrong.  What fun would traveling be if you were going somewhere exactly the same as where you came from?  Using these insider tips on European travel will have you blending in, or at least, be doing things without confused looks on your face, in no time!

Have you been to Europe and spent five minutes staring at the toilet before figuring out how to flush it?  Have you gotten blisters from the surprising amount of walking you had to do?  Tell me your stories in the comments below!

Brexit: What Does this Mean for Travel?

18 Tips On How To Budget Travel Ireland Like A Pro