You’ve heard the rumors about driving while stationed in Germany.  These tales of no speed limits either scare the bajeezus out of you or you can’t wait to get on the road and open up full throttle.  But before you hop behind the steering wheel and drive super granny style out of sheer fear or tear down the road feeling like you’re the next Dale Earnheardt, there are a few things to know and do before you are even allowed to drive in Germany. 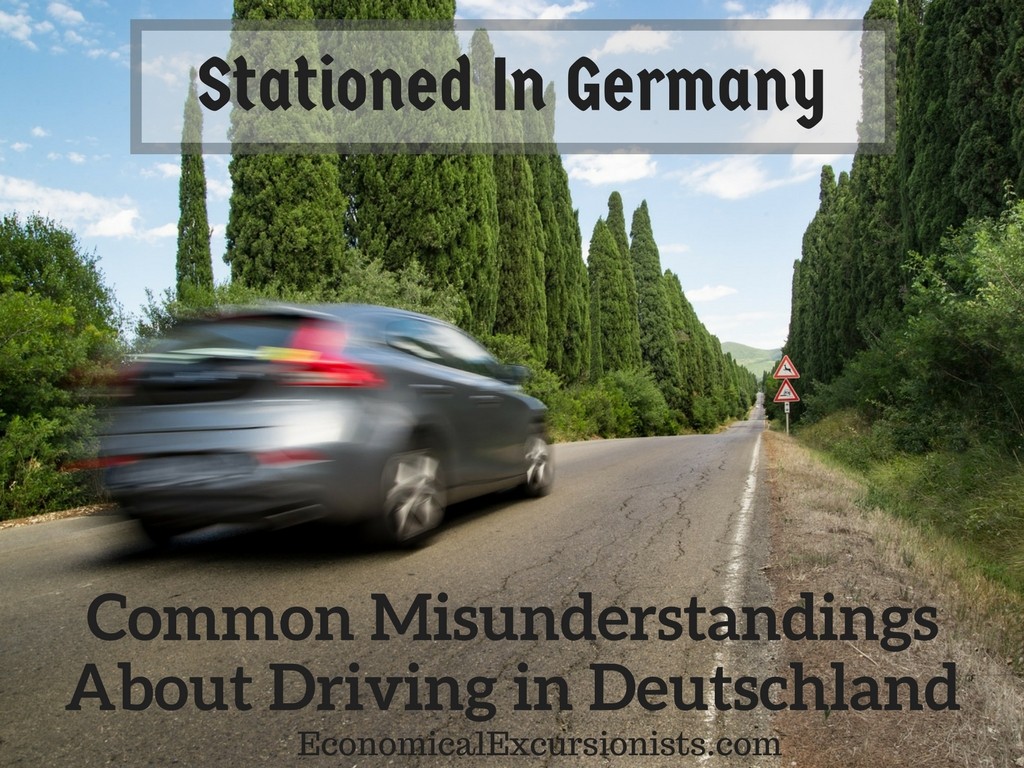 1) Not all streets are no speed limits

This is a common misconception about driving in Germany.  People hear “Germany has no speed limit” and think that it’s a free for all all over the country, but that simply isn’t true.  The only time there are no speed limits are on certain parts of the Autobahn (interstate).  I mean, this IS Germany after all; the country where everything has order and reason! So yes, expect speed limits in towns, on country roads and even on some stretch of the Autobahn.  This is one of the MANY things you will come to love (and eventually miss) about living in Germany.

You’ll often hear that “Driving is a privilege, not a right.”

If you were a German or living in Germany without being in the US Military, getting a driver’s license is serious stuff.  We are talking THOUSANDS of dollars, HUNDREDS of hours of classwork and countless driving tests in all road conditions.  The cost alone would make anyone take driving pretty serious because a few thousand Euros isn’t something your willing to drop “just because.”

If you’ve ever driven on the Autobahn, you will forever be sullied on driving in the US.  On the Autobahn, despite speeds of 150 miles per hour (or more), there is order and rules to everything about it.  People aren’t swerving around other cars recklessly, passing on the right or even talking on their phones. While Americans are used to driving hours on end, most Germans believe in driving no more than two hours before stopping for a break.  In fact, the German Audi we had only had one cup holder in the whole car!  When we grumbled about this, a German friend chastised us that “Driving is for driving, not eating and drinking!”

DUIs? Well, they aren’t nonexistent in Germany, but they are taken MUCH more seriously than in the US.  Get caught drinking and driving and say goodbye to your driving privileges and expect thousands of dollars to be paid and months upon months before even a consideration of getting it back.

So, all in all, if you had to pay that much money and time just to drive, you’d probably take it pretty seriously, too

3) You Need a USAREUR Driver’s Licence

Fortunately, for US Personnel, you don’t have to go through that whole process as the Germans do.  Instead, you can get issued a USAREUR (US Army Europe) drivers license.  This, along with theEsso Fuel Card (read all about that here) , is one of the best perks that US military get while in Germany.   Germany and the US Military are in agreement that those on orders in Europe and with a valid, current US license can obtain a USAREUR  license instead of going through the expensive and long process that a local would have to.

And instead of hundreds of hours of coursework and then driving tests, all you have to do is study for a written test (see below).

Just as an FYI: If you are going to be driving a USAREUR plated care (aka: what you get on post) and want to get American gas prices then you are REQUIRED to have a USAREUR licence…NO EXCEPTIONS.

Common Misunderstanding: Many people think they are on top of things and get an international permit through AAA before arriving.  However, if you are on orders, you will not be able to drive (even a rental!) until you get a USAEUR license. 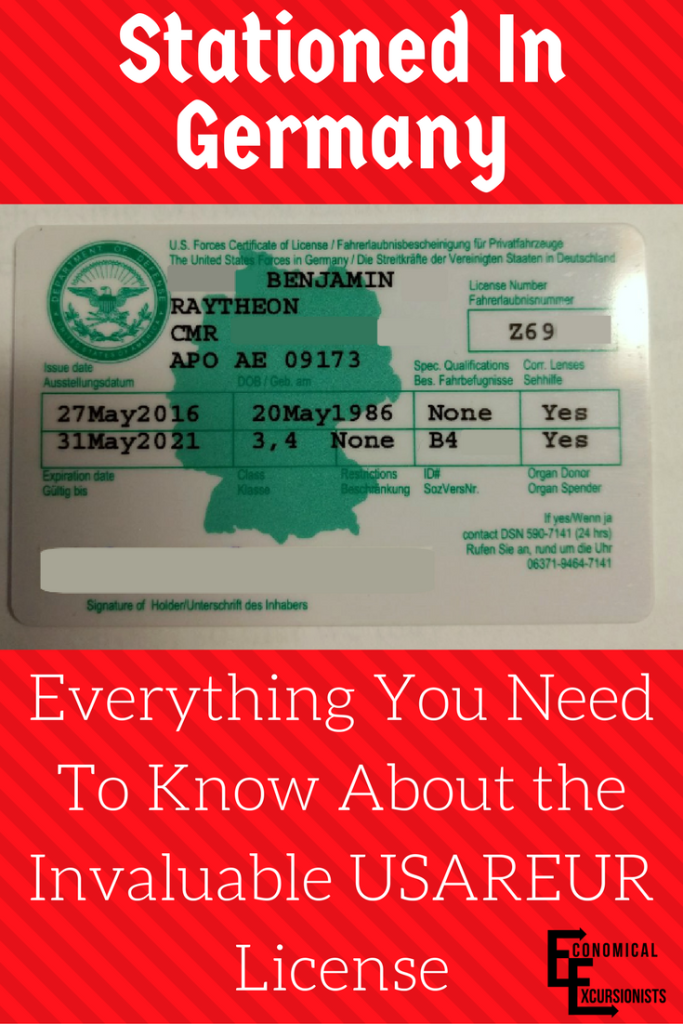 How To Get Your USAREUR Licence

First and foremost, know that driving in Europe isn’t hard or confusing, but it is different from the US.  This is not a test that you just sit down and pass without prep.  I actually have known many, many people who have not been able to pass it on the first or even second try.  With that being said, with a decent amount of studying, you’ll be flying down the Autobahn in no time at all.  You can find a ton of information as well as practice tests here http://www.usareurpracticetest.com/.  I HIGHLY recommend this.

1) Get it done before arriving

2) Get It In Germany

After you arrive, you can head on over to the Vehicle Registration office, or at some installations, they have an actual Drivers License Office and see when they have the next testing time open.  After studying on your own, you can take a proctored exam on location, pay your fee and be on way.

How long is my USAREUR License good for?

Your license will be good for up to 5 years, or until the date of your DEROS.  If you are in Germany longer than that, you do not need to retest, but will need to show your valid US license, pay the fee and go into the appropriate office to obtain a new one.

Can my teen drive in Germany?

You must be 17 in order to get the USAREUR License and must have a valid, current driver’s license.  If your teen meets those requirements, then yes.

Who can drive my car?

ONLY those with a USAREUR License is permitted to drive a USAREUR plated vehicle.  This can be especially annoying when friends or family come to visit and you don’t want to bear the brunt of all the driving.  But wait, there’s hope!

1) Have your visitor have a current, valid international driver’s permit (should be obtained prior to arriving at any AAA for about $20 and is good for 1 year)

2) Take your visitor to your customs office and ask for an “Exception to Policy” paper.  With that, their passport and international permit, they are then good to go.  When driving, they will also be required to have all of those documents on hand as well.

If you are having friends or family coming to visit who rent a car, since they are not on orders and not driving a USAREUR plated vehicle, they can just drive on the international permit.  While TECHNICALLY a valid, US license is good for up to 30 days for tourists, most establishments will ask for your international proof and for only $20, it is just the safer, easier way to do it.

Here are my top posts for our extended time at USAG Hohenfels.

Hohenfels: A first impression and What Can Hohenfels Offer You?

Hohenfels Germany: What can it offer you?

Esso Fuel Cards in Germany: Everything You Need To Know

Where to Ski in Germany

3 thoughts on “USAREUR License: A Complete Guide to US Military Driving in Germany”