Today’s post comes from the amazing blogger, Anna, over at UnexpectedGermany.com.  While I may be your go to guru for Bavarian life, Anna knows the North like I know my Gluewein!

Today, she talks about about an old, and delicious German tradition: Stollen.

Stollen is a festive treat that many people around the world enjoy in the days leading up to Christmas.
If you’ve never tasted it, it is a fruit cake in the shape of a loaf made with flour, yeast, chopped nuts and candied fruit, and spices. Once the Stollen is baked, it is covered in melted butter and then rolled in icing sugar to add the finishing touches. If you’re traveling in Germany in the weeks coming up to Christmas, you’ll see it on sale everywhere.
This traditional delight is sometimes known as ‘Christstollen’ (Christ’s stollen) or Winterbrot (winter bread), when it is eaten as a part of Jewish celebrations.
Check out a traditional recipe here.
Here are some surprising facts about Germany’s famous Christmas cake.

Stollen is older than the USA – Stollen has been around for a very, very long time. The very first mention of Stollen (or Striezel, as it was first known) can be found in the city records of Dresden in Eastern Germany in 1474. That’s a whole 18 years before Christopher Columbus landed on the shores of North America! To this day, the people of Dresden are very proud of their Stollen, and hold a huge event – the Stollenfest – on the on the Saturday before the second Sunday of Advent (that’s December 5 this year) to celebrate their delicious invention.
A 1.6m-long knife is traditionally used to cut the Stollen – Every year in Dresden local bakers and pastry chefs make a massive Stollen weighing between3 and 4 tonnes. During Stollenfest, the giant cake is paraded through the Old Town of Dresden from the Schloßplatz to the Striezelmarkt on a carriage, accompanied by marching bands, the town’s bakers, regiments of soldiers and a lot of other local groups. 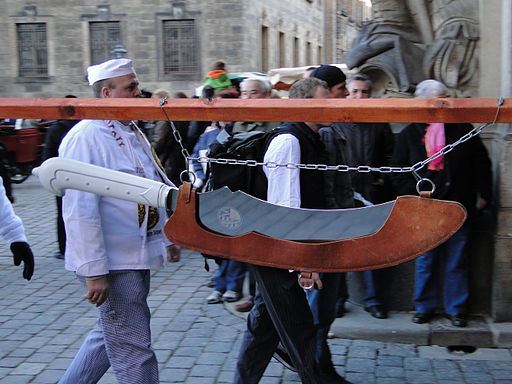 When this huge Stollen reaches the Striezelmarkt it is cut into thousands of single portions by the Grand Dresden Stollen Knife. This silver-plated knife really is big – 1.6 m metres long and a 12kg in weight. The Stollen slices are sold to the crowd, with the proceeds going to charity and to support local trainee bakers and pastry chefs.
We have the King of Poland to thank for today’s Stollen traditions – Today’s tradition of the Stollenfest with it’s giant Stollen cake dates back to 1730 when Augustus II The Strong, Elector of Saxony and King of Poland, decided to hold a massive military festival as a show of strength after the Great Northern War. He invited all of the great and the good of Europe to come along to a place near Dresden, the Zeithain Encampment. 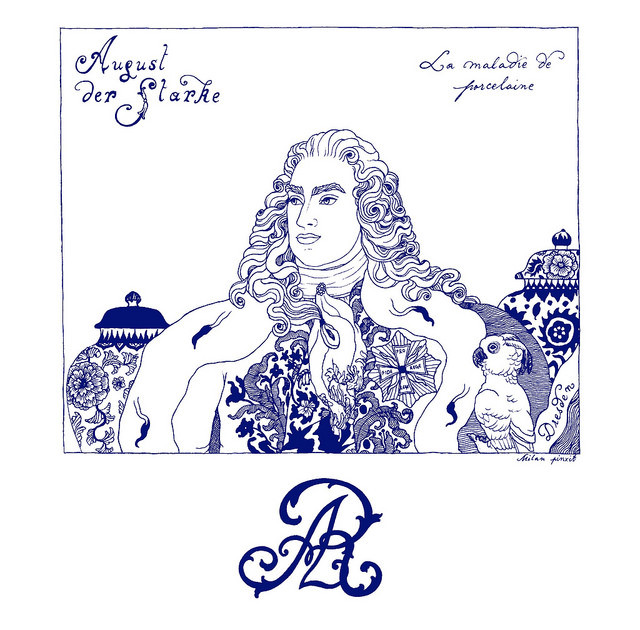 As well as showing off his military might, Augustus II decided to show off the fantastic skills of his local bakers, ordering them to make a record-breaking 1.8 ton Stollen for the festival. A local architect had to design a huge oven big enough to bake the Stollen, and the Grand Dresden Stollen Knife was commissioned to cut the cake. 24,000 slices of Stollen were cut and distributed to the royal guests and soldiers.
This festival was the beginning of the Dresden Stollenfest and it was held every year until the German monarchy was abolished in 1918. In the 1990s a local historical discovered records of this old tradition and a new Stollenfest tradition began in 1994. This year Dresden celebrates the 21st Stollenfest.
One lucky Stollenmädchen represents Dresden Stollen around Europe – Every year the Dresden Stollen Association, made up of the 130 Dresden bakers who have the license to make genuine Dresden Stollen, elect a Stollen Girl, or ‘Stollenmädchen’ to act as an ambassador for Dresden Stollen across Europe.
Rather than simply picking a local beauty, the bakers select one of their current trainees, someone who loves baking and has shown a real passion for Stollen. The Association picks a Stollen Girl by interviewing trainees from the Vocational Training Centre for Agriculture and Nutrition (BSZ). Each girl has her knowledge tested in front of a panel of Dresden pastry makers and bakers.
This year the Stollen Girl is 20-year-old Lydia Heidig. She will open the 21st Stollenfest on December 5 as the festival’s patron and will actively promote Dresden Stollen for the next 12 months.
The world’s longest Stollen was baked in the Netherlands – While Dresden is officially the world capital of Christmas Stollen, stollen cakes are also very popular in surrounding countries. In fact, (according to the Guinness Book of World Records) the longest ever Stollen was baked by supermarket chain Lidl in the Netherlands. The cake was baked in 2010 in the town of Haarlem and was 72.1 metres long. It took 5 hours to make and was cooked as a single piece. The huge cake was made and displayed at Haarlem Railway station.
If you’re ever in and around Dresden at the beginning of December, go along and enjoy the special atmosphere – and a slice of genuine Stollen, of course.

To view the original post, check out Anna’s post at http://unexpectedgermany.com as well as her digital Advent Calendar!

Bad Abbach: Living like a local at the German Spa

10 Different Types of Fests in Germany besides Oktoberfest